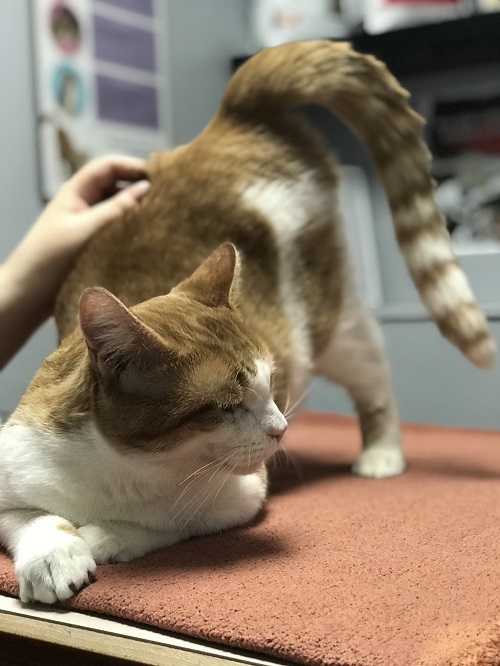 Jack came to us from one of our clients who is involved with helping our local stray cat population.  Jack is a little bit of a quieter soul with a really sweet, snuggly personality.  With the right introduction he gets along well with other “cat friendly” cats and is FeLV/FIV negative.   He’s had a rough start and really can’t wait to enjoy a forever family.

He originally lived outside of a factory with two other stray cats.  Unfortunately the owner of the factory didn’t appreciate having them around and threatened to shoot all three.  One
of the factory staff couldn’t live with this idea so they set out to rescue them.  Two of the cats found homes pretty quickly but Jack was in really rough shape. 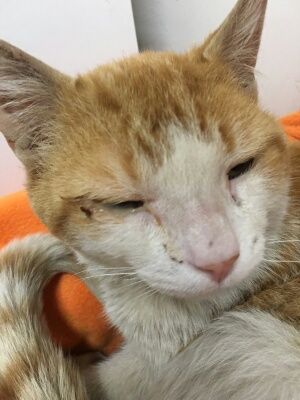 He was covered in ticks. He was filthy and he could not or would not open his eyes except for little slits when he needed to see.  He was very shy, and because of how uncomfortable he was he seemed to be frightened of everything.

After a few veterinary visits with no improvement the Good Samaritan asked for help and
our client took over his care.  He was brought to see Dr.Matt for a third opinion in the hopes that something could be done for his eyes.  Dr.Matt diagnosed Jack as having entropion in both his eyes.  Entropion is normally a genetic condition in which a portion of the eyelid folds inward against the eyeball. This results in irritation and scratches the front surface of the eye.  It is very painful and requires surgery to correct. 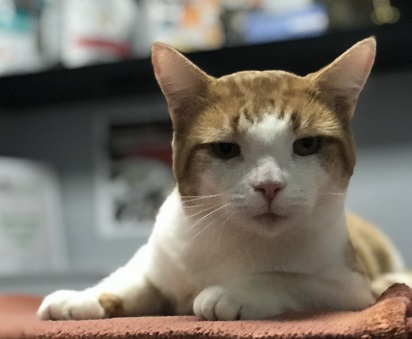 After his eye operation Jack flourished in his foster home. His true personality has finally been able to shine through.  He had no problem with other cats and loves attention. He started to play as if he was still a kitten. His favorite thing is to beat up on one of his toys and to snuggle.