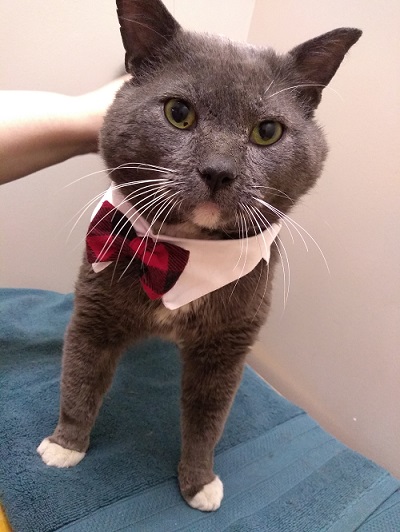 Diesel has had a bit of a rough time.  He has joined us from Hamilton Animal Services where he was taken in as a stray.  We think he’s about 6 years old.  He was a big, scarred up, “tough” looking tom cat.  In spite of being at HAS for almost a month he still had the “junkyard” smell, was covered in small scabs from scratches and was so dirty he had what felt like cement caked around his nails.  The calluses on his feet were some of the thickest we have seen.   He also had a mild case of an upper respiratory infection.  Poor guy.  Not surprising he tested positive for Feline Immunodeficiency Virus.  In spite of all this he had personality plus and so one of the team made a video highlighting his awesomeness.  One of our team saw him on a rescue networking board and fell in love.   We posted his picture on Facebook and among the many really good suggestions was the name Diesel…it just fit. 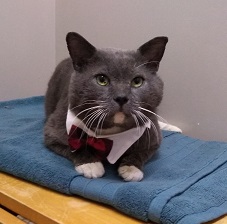 He has since been neutered, vaccinated, microchipped and has recovered from his URI.  He was a little scared initially but now that he has settled in he’s a big love bug.  He loves to give hugs and head butts.  He’s a super affectionate and loving boy if someone will just give him a chance.  So far, when it comes to other cats, he's slightly curious but would mostly rather pay attention to a person.

He’s waiting for his turn at Village Cat Clinic to have some minor dental work done and will then be officially ready to start looking for his forever home.

If you’re interested in adopting Diesel or have any questions about FIV please feel free to contact the clinic. 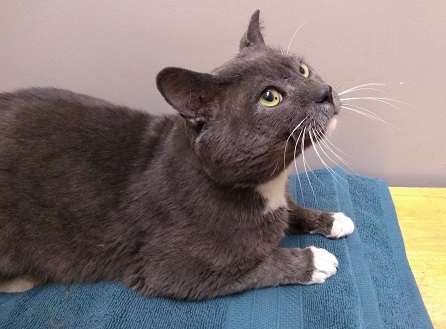