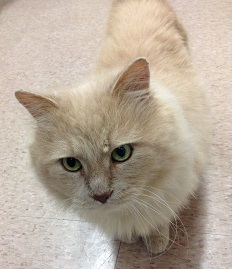 Cinnamon was rescued from the streets by one of our pet owners. Their house was already full with several cats. Scared and scruffy, Whitey came to stay with us to be neutered, vacc, and board until his temporary owner could find him a permanent, safe home. Initially he was very frightened but came around quickly - food bribery helped.

After losing her beloved pet, another client asked about our cat up for adoption - it was love at first sight. Immediately the decision was made to fill her heart with newly named "Cinnamon". His potential new owner left with adoption application in hand.

Another loving pet owner, witnessed all of this from the background and asked our receptionist a few questions about the pending adoption. Cinnamon's fate was sealed as this giving person paid the adoption fee and asked to remain anonymous.... 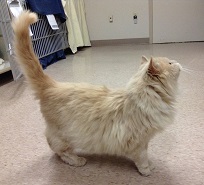 Yes Virginia there is a Santa Claus.

Our Adoption fee is $175 which includes the full initial series of vaccinations, neutering or spaying when they are old enough, deworming, defleaing, fecal testing, FeLV/FIV testing, treatment for any external parasites, insurance trial and microchipping.