was hanging out around the home of one of our clients.  They already had a couple of cats of their own and were unable to take him in.  After having him scanned to make sure he wasn’t microchipped he was placed on our waiting list.  Then we had that really cold snap.  Afraid he would freeze to death; they set up an area in the garage to help this thankful fellow survive.  As soon as we had an opening in the adoption program we decided he needed to come to the clinic.  He has been neutered and now has a microchip.  He’s a chatty guy who would really love to snuggle and often plays with crinkle balls.  Thankful to be in from the cold this fellow is ready to find a family of his own. 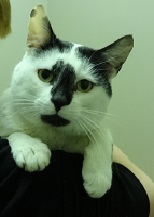 Our Adoption fee is $175 which includes the full initial series of vaccinations, neutering or spaying when they are old enough, deworming, defleaing, fecal testing, FeLV/FIV testing, treatment for any external parasites, insurance trial and microchipping.