We've been Adopted! - Drago and Apollo - the two little kittens who got a second chance! 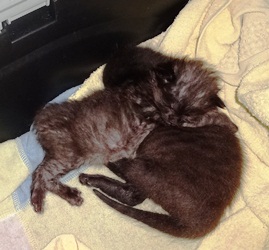 things are just meant to be.  Early one morning we received an email from a friend of a client saying that she was interested in adopting two black male kittens.  When we got this email we were thrilled because black cats tend to have a harder time finding homes than other kitties.  A little later in the day one of our technicians received a call from Animal Services asking her if there was any chance she could take two little two day old kittens.  They desperately needed a place to go since they could not stay in the shelter.  Without asking any details arrangements were made to pick these little guys up on her lunch hour.  Imagine her surprise when she got there to find out they were both black and both males!  One was about half the size of the other, but they both took to the bottle really well and gained weight appropriately.

They still have to stay in our care until they are 8 weeks old but their new owner has come to visit them weekly and was so excited she bought a whole bunch of toys and goodies before these two little guys were even a couple weeks old.  She decided to name the bigger brother Drago and the smaller one Apollo. 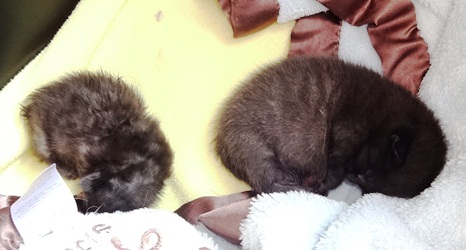 Drago and Apollo are very bonded to each other and even after they were put with the other foster kittens in the house you would often find them with each other playing or sleeping so it’s great that they will be going to a new home together!

Our Adoption fee is $150 this includes the full initial series of vaccinations, neutering or spaying when they are old enough, deworming, defleaing, fecal testing, felv/fiv testing, treatment for any external parasites, insurance trial and microchipping.