As the pet obesity problem in most of North America continues to grow, pet owners have become more and more concerned about nutrition and what they are feeding their cats.  A simple google search will highlight a vast array of potential reasons for this…a more sedentary lifestyle created by keeping cats indoors, ad lib feeding, dry food, etc.  But did you ever think that it might just be the measuring cup you’re using?  Studies have shown that no matter how careful we are, measuring cups are inaccurate.  Depending on the source, by as much as 152%!! Holy smokes!

So if our measuring cups are failing us what can we do?  A few years ago, our nutritionists started promoting the use of kitchen scales and measuring out kibble in grams.  I’ll be honest, I was a long time hold out.  I thought it would be too inconvenient and not worth the extra effort.  What we were already doing worked just fine.

I have a kitty named Noah who needed to go on a diet.  As the clinic’s Purrfect Curves Weight Loss Coach I decided this would be no problem.  I picked my food, did the math and started on the plan.  Every morning I faithfully measured his kibble for the day in my handy measuring cup.  I thought we were doing great but at his one month weigh in Noah had actually GAINED weight!

I double checked all the math to make sure I hadn’t made any errors, checked to make sure no one was slipping him a little extra when I wasn’t looking and finally decided that he just needed less food.   Normally we would decrease the daily calories by 5% and then recheck in two to four weeks.  Using a measuring cup this worked out to be an odd, in between amount so I just “did my best”.   I decided to go for the two weeks and although he didn’t gain weight he still hadn’t lost anything.  How frustrating.

I just happened to have a meeting with the Royal Canin representative for our clinic and was explaining how I now understood people’s frustration with weight loss plans on a personal level and not just as the person who invested all the time in nutrition continuing education.  She suggested trying a weigh scale and arranged for one to be sent to me. 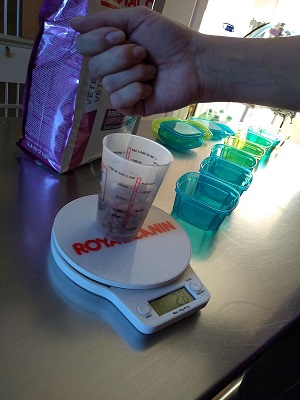 Once the scale arrived, we embarked on what I like to call “Take Two”.  I used the original calorie calculation to figure out Noah’s “new” feeding amount.  The measuring wasn’t actually any more time consuming than when I was using the measuring cup.  Possibly less because I wasn’t second guessing how much was in the cup.

I decided to weigh him after two weeks and low and behold he FINALLY lost weight!  Yah! And for the next two months he continued to lose weight at every weigh in.   The only change was that I switched from a measuring cup to a gram scale.

Just for fun I decided to see how bad I was over measuring in the past.  I filled my handy measuring cup and found out I was overdoing it by an average of 5 g every day.  It doesn’t sound like much but even with weight loss food that turns into an extra 15 kcal every day.  Wow, no wonder Noah couldn’t lose weight, my measuring cup was failing him.

I started switching the clients who were having a challenging time over to a gram scale with similar results.  As an added bonus, the meal plan adjustments are much easier and the cats are losing weight more consistently.

Dr.Jackie Parr, a Board Certified Veterinary Nutritionist known as The Kibble Queen, started a hashtag #BanTheCup and I for one am now a complete believer.  Using a scale takes no more time, is more accurate and allows for easier adjustments. #BanTheCup, but why? In a nutshell because it can be a purrfect tool to help curb the pet obesity problem.