As many of you know we’ve 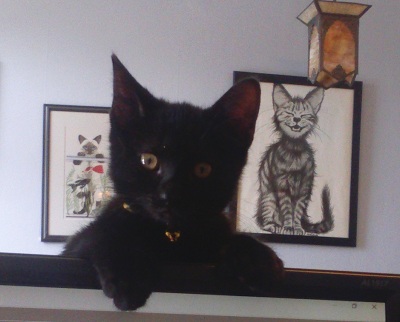 added a new face to our Hamilton team.  Hemingway is now a 10 week old clinic cat in training, part of this training is to hopefully “clicker” train him.

Clicker training in dogs has been popular for a number of years when training dogs as part of a lure/reward method.  As the quickest, and one of the simplest of all training techniques, lure/reward training is the technique of choice for most trainers.  In dogs Lure/reward methods take less time than trying to train using corrections and punishments.  For cats, using training methods where corrections and punishments are the base of the training tends to cause them to become uncooperative and antisocial.  This might be why cats got the reputation for being “untrainable”.

Years ago I was involved in a local dog training facility where I was an instructor for puppy training classes where we used clicker/lure/reward based techniques.  Armed with that knowledge and some internet research Hemingway is going to be our guinea pig.

The idea of clicker training is to teach the kitty that the sound of the click marks when he did something right and a treat is coming.  It’s not the same as whistle training in dogs where the whistle becomes the actual command.  Initially this can be rather hard for the pet to figure out but once they make the association typically training will speed up.

To start we are s 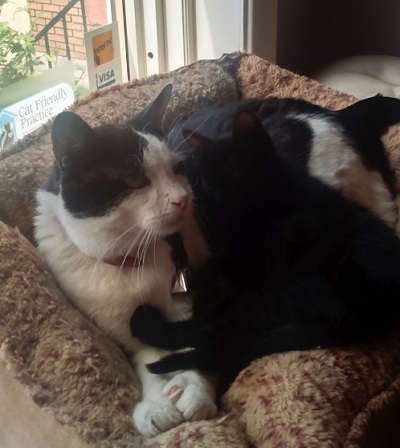 imply teaching Hemi that when his name is spoken he is to look at the person doing the speaking.   To do this we are going to say his name and wait until he looks at us.  The second he makes eye contact we “mark” the behaviour with the clicker.  The first few times this can take a bit.  Hemi has already been doing this for a week so he’s got the idea pretty well.  If he’s having trouble then we can make sounds to get his attention but not repeat his name. Then he gets his treat.  Initially we are going to work on this with no distractions then we can gradually make it harder.  Short sessions of about 5min work best and try to do it when your cat isn’t in super play mode.

Ideally we should be using soft treats that the kitty can eat quickly.  Pill pockets broken into smaller pieces work great for this.  Unfortunately Hemi isn’t a fan of pill pockets so we are using a harder treat that takes a little longer to eat.  Please be aware of the amount of calories you’re adding especially if you’re working with an older cat.  Most treats are about 2 calories each and pill pockets are about 4 calories.  You can see how this can add up quickly.

After Hemi learns his name we will be working on Come so be sure to check back with us.