In Katie's household there is room for only one cat, and not because all other space is filled with dogs. 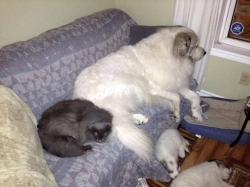 Katie's cat, Maddie-Cat, is a rescue from Hamilton that she took in due to imminent euthanization, as his long line of foster homes had been unable to get his recurrent vomiting and diarrhea under control. This cat had had a rough go, having initially been identified as a female due to his lack of testicles (he was neutered!) and a resulting attempted spay by another clinic (you're not a veterinarian until you try to spay a male cat!), his digestive problems on top seemed unfair. When Katie found out this sweet cat, whom she had developed a relationship with via his numerous stays in hospital, had reached the end of his luck, she had to step in. 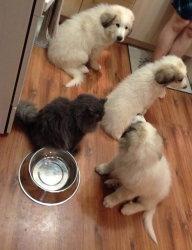 Taking him home, and placing him on a strict diet of one veterinary prescription diet, he was soon on the road to recovery.

That was back in 2007. Now he is a key member of her household. He will not tolerate other cats, but he LOVES dogs. He has taken it upon himself to become the resident puppy trainer with regards to feline interactions. Katie breeds Great Pyrenees, so it is important to impart a respect of felines in this giant breed - Maddie does that well. 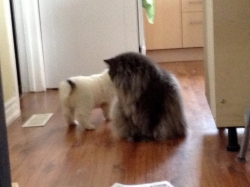 His health is good for a cat of at least 10 years old, although he has flare ups of allergies moderated by medication, but he does not let it get him down and is loving and patient with Katie's fur filled household. She wouldn't be without him for anything.
Written by Katie Goliboski

Omg this article is full of pictures of my girls as pups. Maddie is a great cat. Very good with the pooches.